Just when we thought we were in the clear.....here comes another body blow.

Hunter got sick again. Much worse this time. His current "presentation" of symptoms has been similar to when he originally "presented" cancer - 104 degree fevers and significant pain. The doctors started talking of a cancer relapse. Hunter was moaning. Mom and dad - devastated - trying to keep it together. It lasted 12 - very long days.

Hunter stopped moving. He stopped eating and drinking. Only his hands opened to grasp his favorite Car toys. He moaned, groaned and agonized throughout the nights. He cried every time we moved his body or changed his diaper. Terrible dehydrating diarrhea. Twelve days long.

First, he was hit with Alfa Hemolytic Strep, which could have been the cause of his 104 degree fevers. Antibiotics. Then he got a bacteria infection called C-diff. It offers severe stomach cramping. More antibiotics. They added an intravenous anti-fungal to his rather extensive list of "Anti's". Then a culture of the blood in Hunter's pic-line grew yeast. Doctors worry further about fungus and they call in the Infectious Disease team. Hunter gets a rather routine transfusion of platelets and then more blood.

Finally, they put Hunter in ISOLATION!!!! The C-diff is contagious and there is a risk to other patients. Total bummer about the C-diff, but YAY for isolation!

Testing started with heavy duty radiation from a head to pelvis Cat Scan. This discovered a 7mm spot of something in his brain. That's when they casually told us that all of these symptoms could be from a cancer (infarction) relapse. Or it could be an infection absyss - probably fungus. The possibility of the cancer returning - scared the doctors, nurses, and of course, us. We were all terrified the cancer was back. One of our favorite nurses began explaining the statistical downside of a mid treatment relapse. Once again......we hit rock bottom. Fully aware of the ominous drop is survivability statistics if in fact Hunter's cancer was back at the very end of the chemo treatment. Many tears were shed as Hunter agonized. Please God - give us fungus! Please, please, please let it be fungus of the brain. No big deal.

More testing began. First a bone scan. Then off to the OR for a bone marrow biopsy and bone aspiration. They stick a needle deep into Hunter's hip and get a bone and bone marrow aspirate. It includes actual bone fragments that they test to see the blood running thru his bones. Finally, another spinal tap to test his brain and spinal fluid for signs of Leukemia.

Oh yeah, since his pic-line was infected with yeast, they had to pull it. What do ya know. That means we've had a grand ole' time the last 4 days while Hunter's been stuck with a very sharp needle over and over and over. Sometimes starting at 6:30 in the morning. They've had to do blood draws and then they put in an IV in his left foot to deliver the antibiotics and antifungals and fluids and lipids. The IV's last about two days. Apparently they have a short life, especially when they've got as much going into them as they did and do. I guess one antibiotic in particular is very strong and kills the line. So they then replaced it with an IV in his right hand. That one blew so they now have it in his OTHER foot. We are actually leaving in about 3 hours to go downstairs for them to put in another pic-line, so that all the sticking can stop!

While all of this was going on, Hunter remained on fire with an average temp of 104 degrees. And he was in so much pain and discomfort that he actually became a morphine patient. Every 4 hours he calls the nurse demanding another hit. Four days of morphine and less sounds of agony. Zen and I probably could have done with a bit of morphine ourselves. We cried for 3 days straight.

Okay, okay finally - I do have some good news. His fevers have stopped and he's been fever free. At least for the last 48 hours. He's started to show signs of a comeback. He's getting spunkier and spunkier. More smiles, the return of head bobbing to music, and thank goodness he's starting to eat again. He's still in some pain and not walking or crawling but he is moving his hands, stomach and head.

Also, this round of treatment finally managed to claim the last bit of hair he possessed - his eye lashes. I am happy to report he's got peach fuzz growing back on his head! Woo hoo!!!! His blood counts are coming back up, and that usually helps heal all of the infections and bacteria invasions going on in his tiny body.

Hunter on day 6 of 12 - not feeling so great. His face is swollen from all the fluids he's getting. 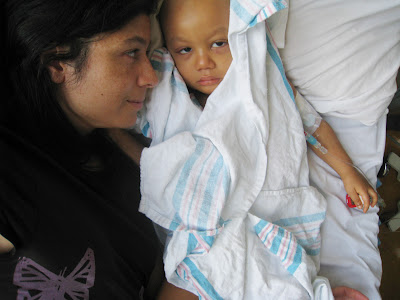 This is the anti-fungal they added to his antibiotic cocktails. Looks like something from Ghostbusters. 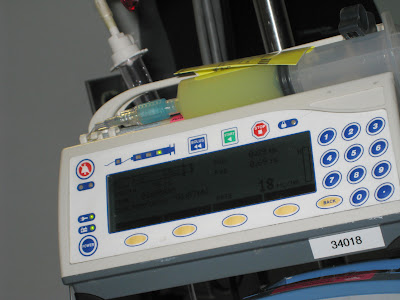 Here he is getting sandwiched in the bone scan machine for an hour - no place for a claustrophobic. 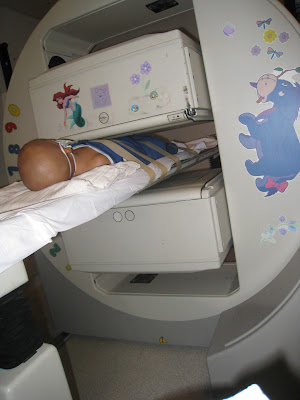 Here's dad holding his head still so they can get an accurate read on his skull. 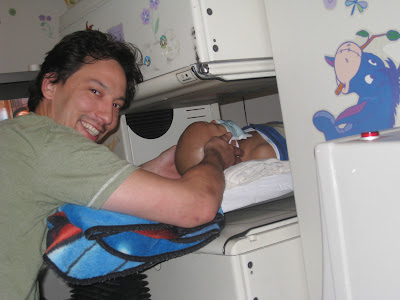 There's Hunter! Nothing but skin and bones. Hee hee. 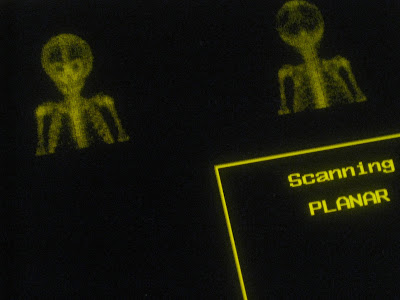 Here's one of the looooong hallways we have to walk down on the way to the operating room. Thank god the lights don't flicker. 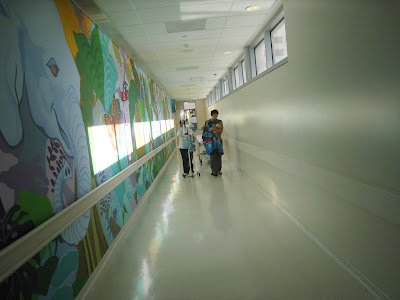 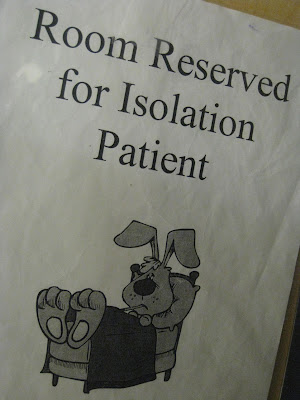 Here is the team of doctors that will be operating on Hunter.

Here is dad letting go - this is usually when a few tears are shed. We've been through this a thousand times, but it doesn't seem to get any easier.

Hunter after the sleepy juice. Definitely not as fun as the happy juice.

After the surgery - picking him off the table and transporting him while he's still under anesthesia. I hate seeing him so lifeless.

Behind closed curtains. This is right after the surgery in the recovery room when we are not supposed to see him yet - just in case anything goes wrong.

Our little love waking up.

Posted by Zen & Lenore
Posted by Lenore at 1:15 PM

Oh no.... I will start praying for you. You guys are at the every end, I will cover in prayer for everything that I can think of. Stay Strong! Keep Fighting! You guys are amazing parents! You have been so faithful and loving, you really are an inspiration.!